In the immediate aftermath of Haiti’s devastating 2010 earthquake, Jim Lange founded Haiti Recovery & Development Company, LLC (HR&DC) with the mission to provide “Dignity for the Dead, Hope and Opportunity for the Living.” In Jim’s view, this has been and will always be, the guiding mantra for HR&DC activities and is the unyielding standard against which all of the company’s efforts will be judged.

While the transformation of the mass and unmarked graves into the Haitian National Memorial and Peace Park is the company’s primary objective and will fulfill the “Dignity for the Dead” portion of the mantra, the “Hope and Opportunity for the Living” portion of the broader HR&DC mission will be achieved through the creation and implementation of a comprehensive recovery and development program. It is HR&DC’s vision that this will be Haiti’s version of the Marshall Plan. Here is how HR&DC’s founder Jim Lange summarizes the company’s complex mission:

“…Through HR&DC it is my intention to catalyze the creation of a responsible and sustainable economic engine whereby Haiti and its people achieve both self-reliance and enhanced sovereignty. Through strategic alliance partnerships with charitable and for-profit organizations, leading governments, academia, international institutions and agencies, the Government of Haiti and the citizens of Haiti, our team will push forward on efforts to (a) catalyze the growth of a new sense of Haitian nationalism, (b) educate and train the Haitian citizenry, and (c) teach the values and scope of a free market economy. Ultimately, we will combine the strengths of many to achieve real and lasting prosperity.

HR&DC’s master plan for achieving the stated goals, is to help establish the footprint for five modern communities, strategically located throughout Haiti. Our program, known as the “5 Cities For Haiti” initiative, is designed to methodically groom multiple disparate, yet synergistic, cities into existence. Doing so will help counteract the disabling trend whereby the capital of Haiti, Port au Prince, has systematically reduced the actual Country of Haiti to secondary status. Haiti is a country, not a city and here is where failed policies must be amended. – HR&DC CEO Jim Lange” 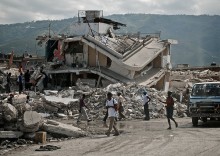 Haiti’s Capital, Port-au-Prince is on the Gulf of Gonâve and has been the country’s largest city since it was first incorporated under the colonial rule of the French, in 1749. The French laid out the city in a grid pattern and called it L’Hôpital.

Port au Prince has suffered frequently in its history, including fires, civil strife, and earthquakes. Much of the city was destroyed by quakes in 1751 and 1770, foreshadowing future disasters.

Over the years, significant political influence, from both internal and external forces, conspired to funnel all political and economic interests into the small footprint of Port au Prince. This concentration of interests has created a myriad of problems for the country resulting in*:

While the noted rankings are certainty troubling, the “concentration of interests” strategy also ignored one inconvenient and tragic truth: The Enriquillo-Plantain Garden fault system runs straight through Port Au Prince. The city’s recorded history of devastating earthquakes was to be repeated.

The quake destroyed the now much larger city, just as has happened in the past. Haiti’s prized Cathedrale de Port-au-prince, the capital building, the Presidential Palace, many of the ministerial buildings and most of the central historic area of the city was destroyed. The resulting displacement of Haitians left with nowhere to live was unfathomable:**

Given this catastrophic destruction and massive need for housing, schools, enterprise and jobs, coupled with the inescapable looming of Enriquillo-Plantain Garden fault system and additional potential plate shifting and resulting earthquakes in Port au Prince, it is the conclusion and vision of The Haiti Recovery & Development Company that our Five Cities for Haiti initiative is fundamentally necessary for Haiti's recovery and its future self reliance.

To help establish the footprint of five modern cities strategically located throughout Haiti to create an economic engine for Haitian self-reliance.

In HR&DC's vision, each community will have:

Within these sectors, housing will also be incorporated to begin meeting the dire shortage of available, affordable and humane living accommodations.

To ensure that all will benefit from the overall initiative, HR&DC has crafted a development model encompassing everything from medieval agricultural vocations to doctorate-level, white-collar professions and every stratum in between. If Haiti is to join the modern world, it must do so “collectively,” and our aim is to include one and all in every aspect of the recovery and development process.

HR&DC’s “5 Cities For Haiti” initiative is actively underway in 3 separate locations and under review in 2 additional locations:

Each community initiative is at its own unique stage of development. For additional information, please see the project overview for the individual city you’re most interested in or contact HR&DC for further updates.