The Haitian National Memorial and Peace Park (HNMPP) will be a non-denominational, non-political sanctuary located on the mass and unmarked grave sites in the Titanyen area.

The site will be transformed into a secured place of reverence with multiple prayer buildings, a wellness center, a reconciliation center, a center for cultural studies, numerous open air pavilions to celebrate life, a caretaker’s house, an administration office, utility buildings to support an on-going operation and numerous monuments. The vision includes plans for modern amenities such as potable water, lighting, sidewalks, parking, restrooms, and security.

Design and development would include a design competition and an open bid for construction. Upon completion, the park will provide full time Haitian jobs for 100 employees and 100 volunteers to oversee the operation. (NOTE: A National Cemetery has also been long considered and is still being reviewed for possible inclusion in HR&DC’s evolving plan.) 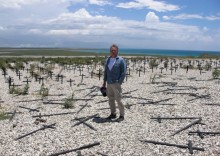 In the immediate aftermath of the January 2010 earthquake, an untold number of Haitians who perished were taken to a mass grave/landfill just outside of Port-au-Prince in the back of dump trucks.

Once there, these innocent victims were unceremoniously deposited on top of existing garbage and entombed by rubble and debris from the earthquake.

Jim Lange, Founder and CEO of Haiti Recovery and Development Company, has set his sights on raising international awareness and the necessary funding to convert this mass grave/landfill into a national memorial.

Build a national memorial providing dignity for the untold dead unceremoniously dumped in the landfill outside Port au Prince.

Over the last year new associates and partnerships have emerged advancing the vision of the National Memorial and Peace Park including:

The first phase of the Haitian National Memorial and in Peace Park in Titanyen is a consultative phase identifying stakeholders, assessing needs, and the developing a request for proposal for a park design competition.

In the second phase HR&DC will evaluate potential solutions to the requirements defined in the previous phase be employing a design competition to offer a wide array of possibilities into the memorial’s final design. This competition will engage Haitians in the park's development to create a sense of Haitian pride and to assist the healing process of the nation.

In the third phase HR&DC will assist the Government of Haiti in developing an open bidding competition, conducting bidding solicitations, and awarding a construction contract for the memorial that includes operator training of ongoing maintenance and support of the park. It will be conducted in this way to assure that openness and transparency are a part of every aspect of this initiative.

In the fourth phase, construction of the memorial will take place. This phase will be monitored according to the recommended plan defined by the winning bid from the solicitation phase.

In the fifth phase, HR&DC will participate in the development and implementation of a marketing campaign to promote the memorial's opening and to ensure sufficient on-going activity at the memorial to sustain its operations.

In the sixth phase, HR&DC will act as an auditor to verify that all project and stakeholder needs have been met.

In the last on-going phase, HR&DC will participate in the unveiling of the park to the people of Haiti and assist in the transition the park to an independent operating entity by establishing ongoing governance and management systems to sustain the memorial.