Under the auspice of its “5 Cities For Haiti” initiative, it is Haiti Recovery & Development Company’s  intention to responsibly participate in the transition of the Corail-Canaan-Jerusalem resettlement camps into one legally recognized city.

At the very least, HR&DC is committed to the stabilization of the country through mediation and constituency building in this volatile area. 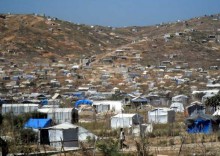 In the wake of the 4th deadliest natural disaster in the history of mankind 1.5 million Haitians were left homeless. As a direct result, Haiti was overrun with well-intended (and some not so well-intended) supporters. From foreign governments to international organizations and institutions, NGO’s, for-profits companies and other “helpers,” Haiti became a worldwide “cause celebre.” Since then, the law of unintended consequences has migrated the country from one (natural) catastrophic event to another (man made) and the future of Haiti itself hangs in the balance.

This dire reality is most evident in the providence of Croix des Bouquets, just north of Port au Prince. HR&DC’s founder and CEO, Jim Lange, first ventured to this providence in early 2011. At that time, roughly 35,000 people populated the government’s two authorized resettlement camps, (Canaan and Corail) and its immediate surroundings. During subsequent visits to the camps site, in the fall of 2011 and early in 2012, it became readily apparent that the size of the camps (occupied land and headcount) had grown well beyond the numbers being published.

While the Government of Haiti struggled to regroup from the calamity of the earthquake, and the “helpers” of Haiti were focused mainly on relief initiatives, the alarming migration of unauthorized settlers received very little attention. This lack of attention can be attributed to three main factors:

“…Hindsight is 20/20 and it would be easy to affix blame for what has happened in Croix des Bouquets. This is a useless and counter-productive exercise and one HR&DC has not, and will not, participate in. Instead, we have spent years developing high levels of trust and rapport with the pertinent actors and stakeholder. This ability to communicate to all constituents has afforded us the opportunity to operate as an honest broker and mediator. We are unique in this regard and we are honored to posses such latitude.”

A HR&DC "FIve Cities for Haiti" initiative. Transitioning the resettlement camps into one legal city for Haiti

To participate in the transition of the main resettlement camps (Corail, Canaan and Jerusalem) in Croix des Bouquets into one legally recognized city.

HR&DC’s “5 Cities for Haiti” initiative is actively underway in Croix des Bouquets and can best be summarized through these noted HR&DC initiative highlights:

In HR&DC’s role as mediator, and for legal and security concerns as well, it is inappropriate for HR&DC to discuss next steps, publicly, at this time.