Jim Lange Warns Groups Not to Profiteer on Haiti’s Misery 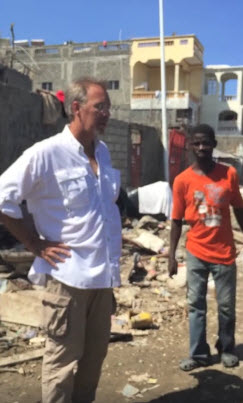 While touring the destruction of Hurricane Matthew in Haiti, Jim Lange, Candidate for US House District 15 and CEO of the Haiti Recovery & Development Company encountered groups already in Haiti appearing to be preparing to profiteer on Haiti’s misery.

Mr. Lange warned them misuse of donations from US Citizens would be exposed and would not be tolerated should he be elected Representative for Congressional District 15, “”The Haitian earthquake of 2010 had a profound effect on me, so much so that I have spent 6 years assisting tens of thousands of survivors. I have witnessed the misery of unfulfilled promises of rebuilding housing and infrastructure with the billions of dollars pledged to help Haiti, much of which came from donations of US citizens wishing to help. If elected to represent District 15, I won’t allow this kind of waste of compassionate monetary support abroad or their tax dollars at home.

Mr. Lange’s founded the Haiti Recovery and Development Company in the aftermath of the massive 2010 earthquake that that destroyed much of the Haiti’s infrastructure. His visit following Hurricane Matthew revealed another catastrophic disaster for Haiti.  “Haitians not only lost their power but, much of their property, and crippling amounts of infrastructure, vehicles and boats, medical facilities, equipment and supplies.  Both the public and private sectors were hit hard, and in my estimation, the effects are not temporary, but long term. In our six years working to help Haitians recover from the earthquake of 2010 we have learned a great deal about how the country has faced and dealt with misfortune. I made this visit to Haiti to assess the damage and offer insights into the recovery process and how to rebuild yet again in Haiti, stated Mr. Lange.

Learn more about why Jim Lange’s experiences in the US and Haiti lead him to run for Congress here: http://www.electjimlange.com/. To learn more about his work for Haiti visit more of this website.