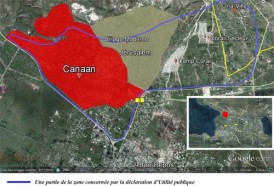 Earlier today, as Haiti’s citizens and the international community awaited word regarding the government potential collapse at midnight, I participated in a ribbon cutting ceremony in the Jerusalem resettlement camp. The ceremony was designed to celebrate the unprecedented cooperation (and result!) between two historically opposing groups. Of course, Haiti being Haiti, not even a celebratory event can occur in this country without conflict and mayhem.

While I fully expected that some residents would express disappointed that their section was not included in the initial project, what I did not except was for local gang members to arrive and to disrupt the festivities by stirring up animosity among residents. Ah, you can just image my joy at being surrounded by 400 frustrated and angry people.

After an hour or so, with opposing parties actually holding the ribbon in their hands and yelling threats, somehow a truce was achieved and the ceremony was allowed to proceed. Of course, I was quite uneasy when the scissors were presented to cut the ribbon. Thankfully, no blood was spilled.

All-in-all, just another day for me in Haiti:-)